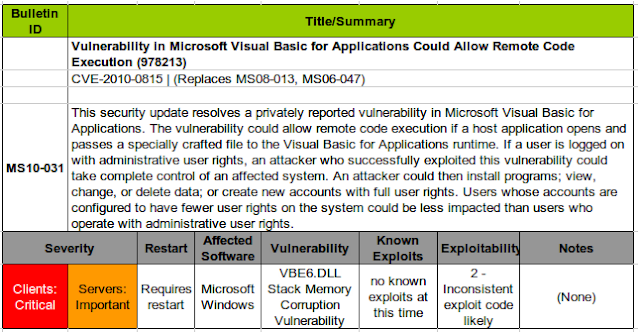 A remote code-execution vulnerability CVE-2010-0815 in the VBE6.DLL was reported in Microsoft Visual Basic for Applications (VBA). Many Microsoft products, including Office, use the Visual Basic Environment such as the VBA runtime. This vulnerability allows for remote exploitation if a user can be tricked into opening a host application that opens and passes a specially crafted file to the VBA runtime. The vulnerability involves a code defect in text parsing code allowing for a one-byte stack overwrite. The patch resolves the issue by changing the way VBA searches for ActiveX controls embedded in documents. Very specific properties of the program must exist for an attacker to gain control of the machine. Three conditions limit the attacker's control:


Microsoft believes that code for this exploitation of this vulnerability is not likely to be seen in the wild within the next 30 days. However, because of the possibility, Microsoft has classified the MS10-031 as critical. 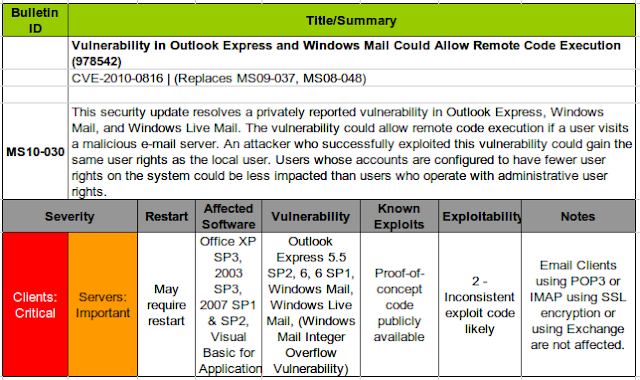 A remote code-execution vulnerability was reported which affects Windows Mail client software including Outlook Express 5.5 SP2, 6, 6 SP1, Windows Mail, and Windows Live Mail. However, default installations of Windows 7 and Server 2008 R2 do not include Windows Live Mail and are therefore not affected by this vulnerability. Proof-of-concept code is publicly available; so be quick to test and deploy the patch as soon as possible.


Microsoft is still developing a fix a proof-of-concept exploit for vulnerabilities in SharePoint Services 3.0 and SharePoint Server 2007 which could lead to attacks in cross-site scripting in Internet browsers such as Internet Explorer (IE).
-Stephen Geldersma, Digital Designs LLC
Sources:
Microsoft TechNet Security Bulletin Summary for May 2010
Rober Keith @ Symantec Connect - Security Response
Last Updated: 05/12/2010 18:55 ET
*Posting is provided "AS IS" with no warranties, and confers no rights.*
Posted by DigitalDesigns at 7:06 PM