COMPUTER ISSUES?
For those having computer issues call (616) 828-1353 or email: support@GoDigitalDesigns.com for a free quote or to schedule a free computer / IT assessment in the greater Grand Rapids, MI area today. There is no obligation with our quotes and we guarantee our service along with standard 10 or extended 30 day warranty! Same and next day service available! 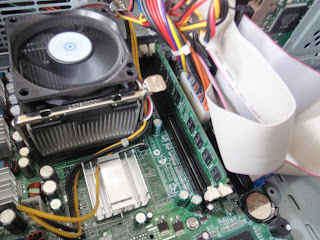 PC REPAIR: CUSTOMER
I recently performed a free computer assessment for a new home customer. They were struggling for the past year with their desktop performing extremely slow. They told me that they have taken it to several places about the slowness issue including BestBuy's GeekSquad and a local computer guy in their area. Every time they got their PC back from servicing it would be slow again.


But what was slow? I wanted to dig deeper into their issue. They told me it was everything - Internet browsing, general computer functionality, the whole bit. 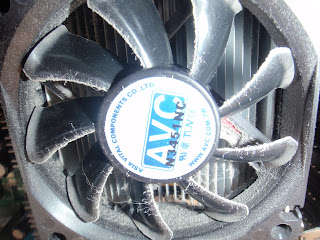 THE COMPUTER ASSESSMENT
Their PC was an old Compaq Presario from 2004 with a 2.8GHz Intel Celeron processor and only 512MB of memory. Right then I knew that 512MB RAM was too little to do anything with a resource hungry operating system such as Windows and all of their newer applications they were running that are mostly meant for newer computers. A bloated McAfee Antivirus was utilizing 14-16% of the CPU every time you want to touch a single file (making that loud hard drive "thinking noise" most people describe. There were a few other bloated applications that probably were also not playing well with the small amount of resources the system could provide it. Going further their ISP was giving them 1.19MB/s download and 0.59MB/s upload bandwidth - but that was because of their remote area. However, all of these factors contributed to the PC's slowness.
RESEARCH
First thing I wanted to do was get the computer filled with more memory. When I'm talking about memory I'm talking about Random-Access Memory (RAM) which is the main memory in personal computers, workstations, and all the way up to servers.
First thoughts was this was obviously a 32-bit system and could only utilize a max of 3.3-ish GB of RAM. Looking inside the box I saw only the ability for two RAM modules with one slot already having a 512MB module. I researched the motherboard specs MS-6577 v4.1 which told me that the BIOS could support a maximum of 2GB with PC2700/2100 (333MHz/266MHz) compatible RAM. However, looking into the actual specs for the computer listed by Compaq (HP) said that the BIOS only supported up to 1GB. Getting mixed results I ended up ordering (2) 512MB and (2) 1GB memory sticks from my vendor.

UBUNTU 10.04.1 LTS vs WINDOWS XP
While waiting a couple days for shipping I was thinking more outside the box. The customer told me that they use their computer only for Web surfing, email, and occasional world processing. I asked them if they use or see themselves using that specific PC for anything else (Microsoft only applications). So over the phone I began talking about the benefits of none other than the Linux distribution of Ubuntu!
In a brief summary I told the customer that Ubuntu uses system resources much more efficiently than Windows, it will be more secure and stable than Windows XP without much of any learning curve aside from getting use to use a different user-friendly operating system. They can browse the Internet and check their web mail with Mozilla Firefox along with using OpenOffice.org's word processor. I kept the conversation basic as I could imagine it would be hard to grasp something like that over the phone and not visually see it. Non the less I was not about to get to technical about Ubuntu such as that Ubuntu 10.04.1 (the version I would install) uses EXT4 file system and unlike Windows with NTFS file system, EXT4 doesn't need to be defragmented! 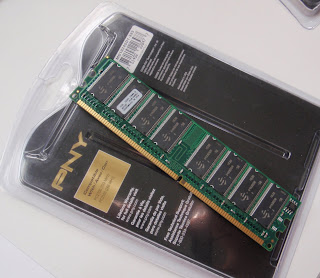 INSTALLING / TESTING MEMORY
Today UPS arrived with the memory. First thing I did was take out the old 512MB stick and put in two of the 1GB sticks. I then went into the BIOS and changed the boot order of the machine to allow booting from CD-ROM first. I put in a copy of which turned out to be Ubuntu 10.04.1 Server. One of the options in the first menu of the disc was to "Test Memory" which uses Memtest86+ v4.00. This is a great way to test out the stability of the memory. Any errors at all even just one means you have faulty RAM. You could get by with installing an OS with the RAM and using the machine for a while but in time those couple or that single memory error could come back to haunt you. 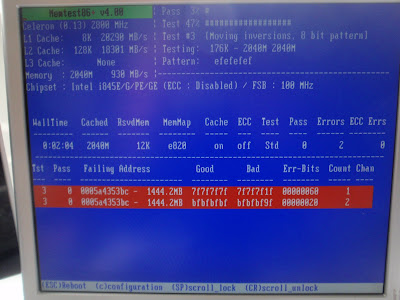 So I ran Memtest86+ on (2) 1GB sticks of PNY PC2700 (333MHz) RAM. Within only 4 minutes of running the test it showed back with errors. In order to better get an idea of which memory module was giving the errors I restarted to test with individual sticks to isolate the issue. The first stick showed errors again within 4 minutes time and the second one is still on the test with over 4hrs in its 5th pass. With this amount of time the module integrity is most likely completely fine. However, there are those out there who run the test overnight. In the past for me if I don't get any errors within the first 2-3 passes then I have always been fine.
So now I have to RMA the (1) 1GB PNY stick and exchange it for another. This has been disappointing but stuff like this does happen. I'm glad that I have a good vendor that allows me to have my own account manager to help me with any issue such as this.


Memtest86+ can be individually downloaded here. Otherwise I like to just use the "Test Memory" option in Ubuntu Live CDs.
BLOG POST TO BE CONTINUED...
For now I could start or wait for the other stick for installing Ubuntu with the good 1GB stick or I'm thinking about making it a dual boot system with Windows XP and Ubuntu 10.04.1 in case they ever would need windows in the future. All the customer really cares about is that they can get online. They realize that the computer is old but I promised them a good price to get their system up and running efficiently without have to spend more money in the near future to get a entirely new system. I hope to get a new working module of RAM through the weekend and have the system all setup by beginning of the week. I offered the customer a temportary replacement laptop to make up for the extra couple days with their PC while I'm wainting on my vendor for the replacement memory. I figured that was the best thing to do right now since many Auto dealerships will give you a loner while they give your vehicle. Just one of the ways Digital Designs LLC cares about our customers and if we take just longer than expected then we make the situation right.
QUESTIONS FOR FOLLOWERS
What are your thoughts or experiences with slow computers (besides pure frustration)? What have you done personally to speed them up? Do you upgrade hardware or buy a new computer all together? If you buy a new computer what is your average upgrade cycle - 2, 4, or 5+years?

Posted by DigitalDesigns at 4:56 PM